Picture this…the volleyball team is huddled before the start of the set. The coach comes into the huddle and says, “Here’s the line-up…” As she reads off the names of the athletes starting the set, the huddle is filled with silent fist pumps from the starters, and groans of disappointment from the non-starters. What if I told you that there is… NO… starting line-up in volleyball.

ESPN sports analysts and parents who love basketball have tainted the mindset of our youth volleyball players. In basketball the best players are always the first five to be on the court. This is not the case in volleyball. There are many outside factors that a coach needs to consider when deciding the starting line-up. The good thing is they have several tricks up their sleeves when it comes to who plays where on the court. 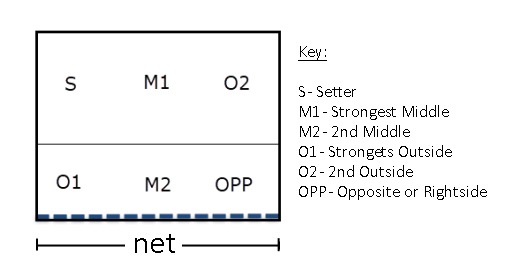 As you can see, there are many factors that help a coach determine who plays when and where. Make sure you son or daughter knows that groans of disappointment are not appropriate when the coach reads the starting line-up for a set. Each athlete should move into their current role and give 100%. If he or she is on the bench, that bench better be the loudest most supportive bench. If her teammate stuff blocks the other team’s best hitter, she should be jumping up and down in excitement for her teammate. The moral of the story is… don’t waste your energy trying to know what is going on in the coach’s brain. Roll with his or her strategy and win every time you touch the ball.